How did the Mancomunitat work?

Structurally, the new institution was composed of an assembly with 96 provincial representatives (36 for Barcelona and 20 for each of the remaining three provinces), and of the Council, made up of eight councilors and the president of the Mancomunitat.

The administrative offices of the Mancomunitat were organized into several departments: Administration, Tax Collection, Operations, and Treasury. These departments were divided into sections, and these, into offices. In order to work for any of these departments, one needed to pass a civil servant exam.

On the other hand, the Office and Section of Architecture originated in the transfer  of services from the diputacions to the Mancomunitat. It was in charge of the services offered at the building for Charity, and the building that housed the Presidency, the Assembly, and the Central Offices.

Meanwhile, the goal of the Town Support Office was to assist the towns in the the opening of schools and building school facilities. It also sought to help people take advantage of the services offered by the Mancomunitat, to aid local governments with their paperwork, and to counsel town governments and public servants in Catalonia.

It  was in charge of saving all the administrative offices’ proceedings belonging to the Mancomunitat. It contained all the documentation that had belonged to the Diputació of Barcelona.

Official records of the Mancomunitat

They were given the go-ahead on September 15, 1920, and they started being published in the following October. Once every two months, they contained the proceedings of the Permanent Council’s meetings. They also included regular reports, notes, and graphs detailing the services offered by the Mancomunitat. Maps and photographs of the works performed were also published.

It was a free publication for all town halls, corporations, and dignitaries designated by the Council.

Delegations and transfer of services

Through the years, the Mancomunitat took shape thanks to transfers of services from the four diputacions in Catalonia.

In 1914, transferred services included Mental Hospitals, the Provincial Highway Department, and the secondary railroad construction and management services. Four years later, the Mancomunitat received the services of Road and Trail Construction, and the Agricultural School.

Additionally, on January 12, 1920, other services were transferred, such as Charity, Operations and Tax Collection, Operations, and Debt, as well as the right to enforce equal allocation amongst towns. A few months later, on August 4, the remaining services pertaining to the diputacions were transferred over, with the exception of those that the central government kept to itself.

The Assembly of the Mancomunitat that elected Enric Prat de la Riba as president on April 6, 1914. 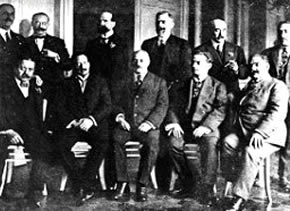 President Josep Puig i Cadafalch with the Council of the Mancomunitat of Catalonia, 1917 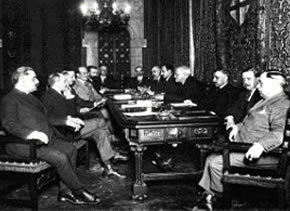 Meeting of the Council of the Mancomunitat of Catalonia with Josep Puig i Cadafalch as president, 1918.