As an answer to the central government’s inadequacy , the Mancomunitat of Catalonia tackled many social projects. Madrid’s inaction had left Spain behind compared to other countries.

The main pillars of the Mancomunitat’s social projects were to protect the children, provide private retirement funds, and help the unemployed join the workforce.

Pensions for workers over 75

Those older than 75, of good moral conduct, with low income, handicapped, or destitute with no resources of their own,  whose direct family could not support them, and who were not getting help from some kind of charity or shelter could benefit from this program. Those who had worked most of their lives, were born in Catalonia, or at least had lived here for the last 30 years could also benefit. Additionally, one needed to have lived in the same town for the previous 10 years.

The goal was to provide children’s insurance for all provincial orphanages in Catalonia. Its main objective was to save enough money so that orphaned children could get a head start once they became legal adults at 20. The Mancomunitat itself was in charge of making regular deposits from when the child was 2 until they were 15.

It began to operate on January 2, 1912, and it was created as an initiative of the then extinct Museu Social’s board. Its mission was to fight against long-term joblessness, post free job offers and services from owners, workers, laborers, domestic workers, and to serve as intermediary to ensure uneventful transactions.

In 1915, they gave the go-ahead to a new organization that would focus on compiling professional profiles organized by trade and specialization, plus a list of job offers and services, which worked in coordination for increased efficiency.

The Mancomunitat, in conjunction with Barcelona’s job placement associations, established job placement offices for workers all over Catalonia. They gave preference to those workers who lived in the same town or county.

It began its operations in 1915 under the name Secretariat d’Aprenentatge (Education Secretariat), and it used to be dependent on then extinct Museu Social. It answered to the need to give advice to young adults in choosing a trade, to counsel them in their relationships with employees, and to foster the development of vocational studies.

Information and secretarial division
It was in charge of performing the secretarial duties for the Institute. Additionally, it performed information management tasks, such as gathering members’ personal and family information, which was kept in individual files. When the Board was not available, it gave advice based on their research. It was in charge of the Library and the publications by the Institute. It provided informational services for vocational education.

Technical division
Its function was to collect data onsite at workshops and factories in order to generate work professional files. It organized meetings with experts, and was in charge of lab work.

Statistics division
It encompassed all the other services offered by the Institute. It received data from job applicants’ files and tests used to measure job related parameters. They were in charge of analyzing statistical data (such as percentages and percentage graphs) used to control and determine the necessary aptitudes at vocational schools.

The Council of the Mancomunitat transformed Catalonia’s Social Policy Institute into the Information Center for Economic and Social Programs in order to study data relating to social topics and, therefore, Catalonia’s economy as a a whole. Its job was to collect and archive data that would be used to reconstruct Catalonia’s social organization history.

They were approved by the Assembly of the Mancomunitat on February 28, 1923. With these funds, the Mancomunitat tried to provide one of the benefits that town officials in Catalonia demanded the most. Town hall officials and staff were able to become members and contribute regularly. The maximum age they could contribute at was 65, and it started at 20 years old for town clerks. 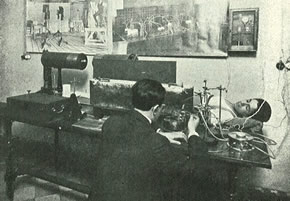 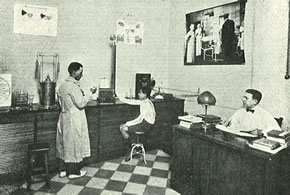