Limited action due to lack of economic resources

The first budget of the Mancomunitat, created to meet the first organizational expenses, was approved by the Assembly on April 7, 1914, and revenue came from voluntary contributions that the diputacions belonging to the Mancomunitat agreed to. The 1915, 1916, and 1917 budgets were drafted by taking into account those resources authorized by the December 18, 1913 royal decree.

In the income section of the budget, the revenue of the Mancomunitat is divided between regular deposits and extra income. The former were the ones authorized by the aforementioned royal decree, and the latter came from bonds issued by the Mancomunitat.

In the expenses section, the specific loans needed to meet regular and extra expenses were detailed and itemized.

Road, trail, and bridge construction; telephone network acquisition and new lines installation; water works; building and installation of schools and libraries; the creation of new organizations; and everything that represented collective wealth was considered as an extra expense.

On the other hand, expenses by the government and the administration; those used to maintain services transferred to the diputacions; those used to preserve and support the institutions created by the Mancomunitat; and interests on active bonds were all classified as regular expenses, as were ongoing expenses.

During the September 2, 1921 meeting the Assembly of the Mancomunitat approved a series of basic agreements. One of them was the project for the creation of an agricultural loans service. It was intended for the purchasing and distribution of farmable land for farm laborers and to build inexpensive houses, which was the main goal of the basic agreement by the Assembly. 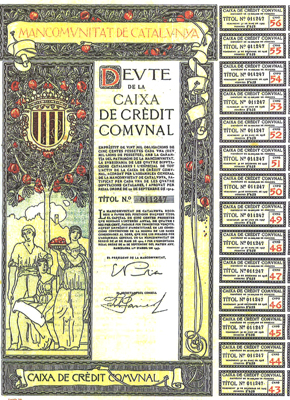